Dinamitas are basically big Doritos chips, but rolled into a cylinder. Why reserve this technology for the Hispanic market? 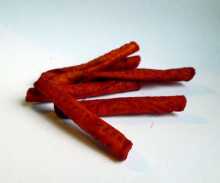 Here is what it is like to eat Doritos Dinamita chips:
Chip #1: Mm, this is pretty tasty! And it's so much easier to eat a tube than the usual triangular chips.
Chip #2: These have a really great lime flavor, and a nice little spicy kick.
Chip #3: OH MY GOD I'M DYING CALL 911 GET ME A SODA OR SOMETHING HELP HELP HELP
I first encountered Dinamita chips at a Winco Foods store last night. Winco Foods is a local chain of bargain grocery stores, many of which stock a lot of Hispanic foods. (It's where I encountered delicious Bimbonuelas.) Most of the Dinamita packaging is in Spanish, although a few bits are given in English (below the Spanish bits). I love multicultural snacks! And why aren't these an Anglo thing? Because they really are pretty tasty.
Apparently the snack manufacturers have decided that only Hispanic people like spicy foods. Witness the Tapatio co-branded Doritos and Ruffles chips, which are as difficult to find as they are delicious. I particularly like the Tapatio Lime flavored Ruffles, which is kind of what I was expecting from these.
I should walk it back and explain that I'm not a COMPLETE wuss when it comes to spicy foods. I usually order Thai food with 2-3 stars, and I use Sriracha sauce on a lot of foods. This makes me a boss spice lover to 50% of the population, and a complete wuss to the other 50%. If you are the other 50%, then you will really like these chips, because DAMN THEY ARE SPICY.
My first impression came when I picked up the bag, which is surprisingly heavy. That is because it is mostly full of product. We're so used to Doritos bags which are 95% air, it seems weird to heft one that is actually 3/4ths full.
My next impression was that "Dinamita," a name which uses sticks of dynamite for the two letter Is, is probably descriptive of the effect that these have on your colon. The package shows two Dinamita chip sticks apparently being blown out of a fiery explosion, which caused my friend to remark that "At least it's truth in advertising, because I'm pretty sure that's what your butt is going to look like."
Dinamitas are basically big Doritos chips, but rolled into a cylinder. Why reserve this technology for the Hispanic market? It makes them easier to eat (no more jabbing the roof of your mouth with an errant corner!) and they seem to be crispier as well.
Seriously, though. Have a Coke or a beer handy the first time you try them. WOW.
< Previous post:

We Support
Climate Activism
Click to reach the League of Conservation Voters.
Conversation Processing Intelligence™ beta website!
Click here to visit the hub of the Klat Network.
This site is part of the Klat network of blogs, forums, and communities.